About the Stiffness of Sandwich Structures 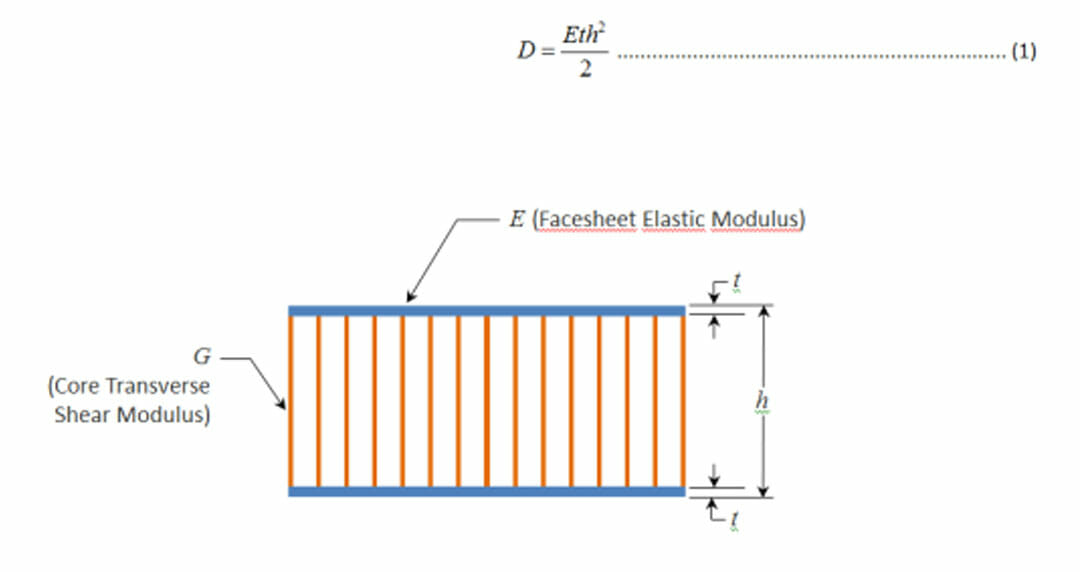 This Tip & Trick will expose a common misunderstanding about sandwich structures, causing designers to often overestimate their overall stiffness or to stiffen them in a less than optimal fashion.

Because of their high-stiffness and strength, composite panels can be made thin, yet be suited to carry significant in-plane loading. However, because they are thin, these panels will not be very stiff in flexion. An easy way to remedy this situation is to incorporate a core material within the panel. The core allows the stiff composites to be located further away from the panel’s neutral axis, increasing its flexural stiffness.

Sandwich panels are often compared to I-beams, where the facesheets are homologous to the I-beam’s flanges while the core represents the beam’s web.

The problem with this analogy is that it does not take fully illustrate the relatively low shear stiffness of the core material. When transverse loads are applied to the sandwich structure (or if transverse shears are otherwise present), the actual deformations will not be predicted correctly unless the core shear stiffness is adequately modelled.

Consider a length d of this sandwich panel arranged as a cantilever beam and loaded vertically at its free end with a force V (see Figure 3).

From beam theory, the deflection can be related to a moment M within the beam with:

Since the moment is also related to the applied force V, we have the following differential equation:

Knowing that the beam is rigidly attached at x=0:

The deflection along the beam is obtained as:

And at the tip:

However, when this experiment is performed with typical core materials, one soon discovers that the deflection predicted for the tip of the beam is underestimated. In reality, another component of deflection w’ must be taken into consideration due to the relatively low transverse shear stiffness of the core:

In our example, a constant transverse shear stress is carried throughout the core:

And the additional deflection due to shear can readily be obtained as:

Thus, the total deflection at the tip of the beam becomes:

And there, in this last equation, we expose the true behavior of sandwich structures with respect to out of plane loading. Of course, the final equations will vary greatly as a result of the actual problem’s boundary conditions, but the general idea is that three parameters can be altered to increase the flexural rigidity of a sandwich panel:

Increasing the facesheets’ thickness is the least effective method of achieving a rigid sandwich (not the mention the cost involved, especially when dealing with composites). In practicality, the optimal sandwich structure will be a judicious combination of core thickness and core stiffness.

This exercise also highlights the importance of correctly inputting the core transverse shear stiffness values when performing a finite element analysis, allowing the software to estimate deflections adequately. Finally, one should always take great care in ensuring that the core transverse shear effects are taken into account when performing buckling analysis of sandwich panels. This will be further explored in a future tip and trick.

Engineering Dialogues with the Future