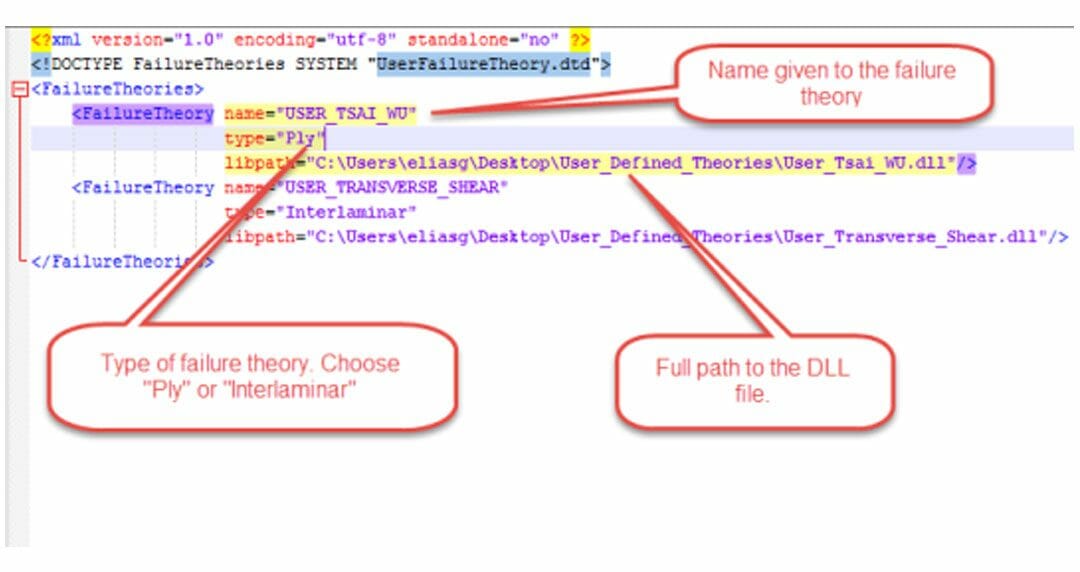 This Tips & Trick shows how you can define your own ply and interlaminar failure theories in NX Laminate Composites.

The main steps are:

Make sure to set the configuration to x64:

Figure 2: Changing the configuration to x64.

From the project Property Page, change the project type to DLL under General->Configuration Type.

Some header files needs to be included in the project. These headers define how a failure theory should be coded. The headers are located in:

This path has to be specified in the project Property Page under C/C++ -> Additional Include Directories.

Figure 4: How to specify the path of the header files in the project property page.

Figure 5: How to add a C++ source file in Visual Studio.

Code the failure theory and build the DLL

If the user-defined theory is a ply failure theory, the first function needs to be implemented. If the user-defined theory is an inter-laminar failure theory, the second function should be coded. Both functions take several arguments like the material type, the element type, the ply location, the stress and strain tensors, the stress and strain limits, etc. The functions return 0 if the computation succeeds and 1 if it fails.

The figure below shows a snapshot of the function “EvaluatePlyFailure”.

Figure 6: Snapshot of the function “EvaluatePlyFailure”.

Once both failure theories have been coded, the source files can be compiled through two separate Dynamic Link Libraries (DLLs):

Let’s assume that the DLLs are placed in a directory called “User_Defined_Theories”.

An XML file should now be created. This XML file provides a name for each failure theory and points to the corresponding DLL. A template of such an XML file can be found under:

The XML should be modified as shown below:

Figure 7: XML file that defines the name of the failure theories and provides the path to their corresponding DLL.

In this example, the name of the XML is “UserFailureTheory.xml” and is located in the same directory as the DDLs files.

Figure 8: The XML file and the DDLs are placed in the directory User_Defined_Theories

NX Laminate Composites needs to point to the XML file. This can be done in the Customer Defaults settings. Under Simulation->Laminate Modeling, put the full path of the XML file under “User Defined Failure Theory XML Config File”, as shown in the figure below.

Use the failure theories in the NXLC modeler

The failure theories can now be selected in the NX Laminate modeler:

Now you can process the ply stress or strain tensor from any NX-supported solver like NX Nastran, MSC.Nastran, Ansys, Abaqus, LS-Dyna and Samcef. NX Laminate Composites will compute the failure metrics (failure index, strength ratio and margin of safety) using the code you generated and will output the results exactly in the same way that it does for ‘out-of-the box’ failure criteria:

Figure 11 shows a contour plot that displays the maximum failure index over a part, along with the critical ply ID.