How to create a load field using ISO lines 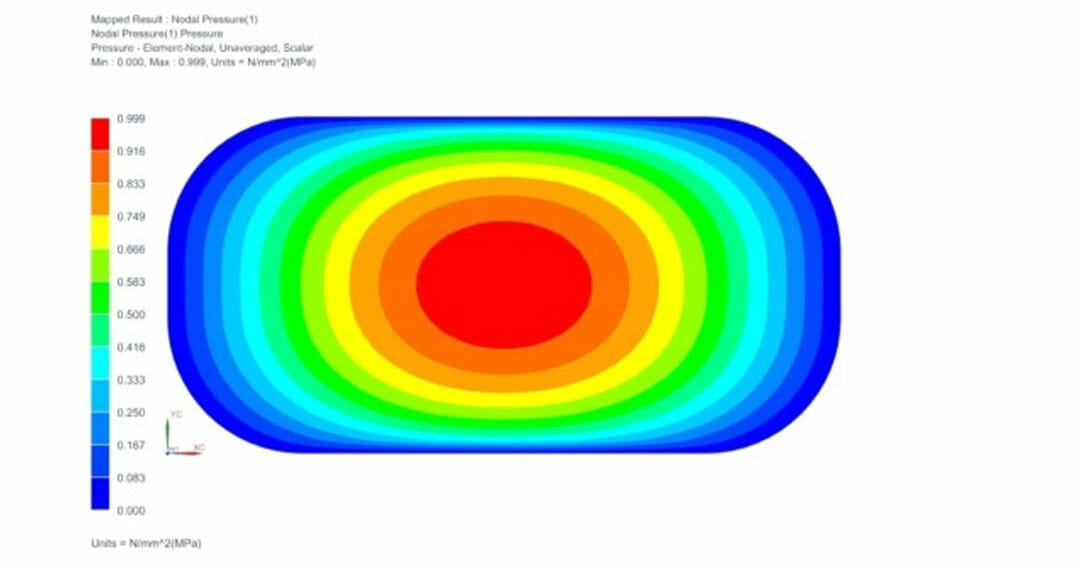 This Tips & Trick shows how to use an NX formula field and face’s isolines to easily define a spatially-varying pressure load.

Let’s assume that it is intended to define a pressure distribution over the face shown in Figure 2, such that the maximum pressure occurs at the center of the geometry and gradually decreases to zero at the edges.

A simple way of defining such a load distribution on an arbitrary face is with the face’s ISO lines. In Siemens NX, it is only required to define the extreme ISO lines, i.e. U=0, U=1, V=0, and V=1, and NX will automatically create the intermediate lines. Figure 2 shows the extreme values for the ISO lines on the face. Note that U and V definitions are interchangeable.

The next step is to define a function in terms of U and V that satisfies the requirement of maximum value at the center, i.e. U=0.5, V=0.5, and zero values at the edges, i.e. U=0, U=1, V=0, and V=1. There are many functions that can define such a distribution, a simple one would be:

Where P0 is the magnitude of the pressure at the center, which is assumed to be 1 in this example.

In the sim navigator, define a new load as nodal pressure. Under the Model Object group, select the face on which the load is to be applied, and then in the Magnitude group choose New field->Formula.

In the Formula Field dialog, under the Domain group, select the independent variable to be Parameter Plane. Then in the Spatial Map group set the type as Parametric Plane and set the Mapping as ISO Lines. You may need to expand Spatial Map section.

Under the ISO Lines (u) and ISO Lines (v) groups, select the edges that define U and V as shown in Figure 2. Note that after selection of the edge(s) that define either of ISO lines, it is required to click the Add New Set before proceeding to the definition of the next ISO lines.

Then under the Expressions group, enter the function that defines the pressure distribution and click OK.

To graphically verify the load distribution, in sim navigator, right click on the defined load and select Plot Contours.

Figure 7. Make a contour plot of the applied load

Then, a contour plot of the applied load will be generated in NX.