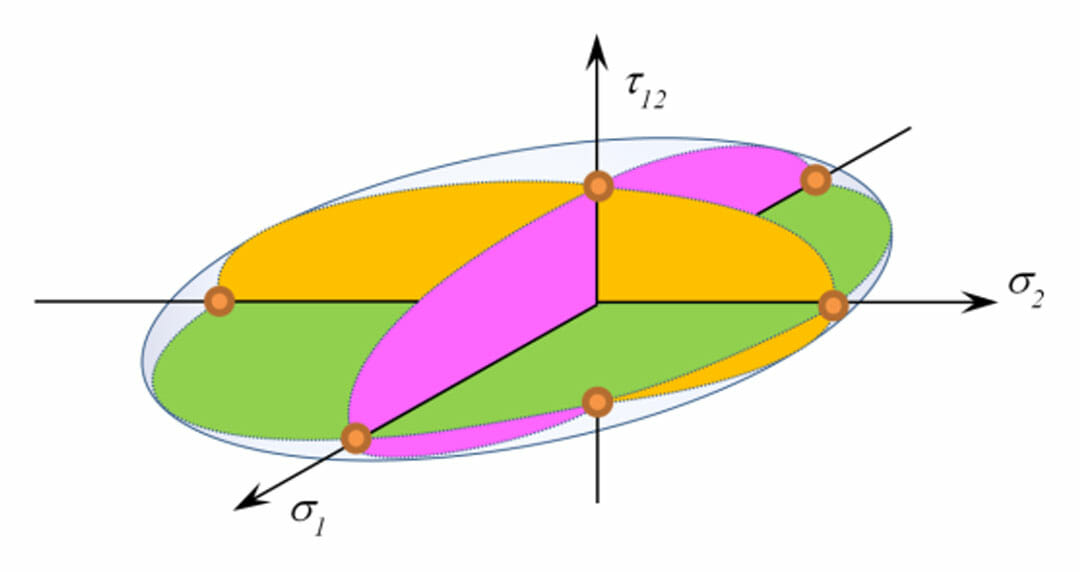 This Tip & Trick will explain the difference between the failure index and strength ratio and their respective applicability when using composite material quadratic failure criteria.

In a uniaxial loading situation, predicting failure obviously reduces itself to comparing the internal stresses (s) to the material’s strength (F) in the loading direction. In this situation, the failure index (FI) and the strength ratio ® are defined as:

In this simple scenario, the failure index and strength ratio are clearly related as they are the inverse of one another. Extending this example to a composite material layer (Figure 1) and comparing each component of the stress state to the material strength properties, one can draw the ply failure envelope for the maximum stress criterion (Figure 2).

A quadratic failure envelope boundary can be defined within a single equation.

For example, the Hill failure envelope can be expressed as:

If the stress state is contained within the volume surrounded by the ply failure envelope, no failure is predicted. One would still like to know by what strength ratio R the stresses can be multiplied so as to cross the envelope, producing failure. Simply multiplying all the stresses from the Hill failure envelope by the value R yields an expression that can readily be solved:

From which, only the positive value is retained. In this case, it makes sense to define the ply failure index as:

Clearly, failure can be ascertained when the failure index has a value of 1 (ply envelope boundary) or above. A value between 0 and 1 will also provide an indication of how close to failure is the ply.

If one instead uses the Tsai-Wu Failure criterion:

And F*12 is a user-defined interaction coefficient.

The strength ratio can be obtained by solving the following equation:

Note that some terms are of second order while others are not. Solving and keeping only the positive root yields:

Now, for consistency with the other quadratic failure criteria (and for historical reasons), the Tsai-Wu failure index is defined as:

In this case, there is no direct relationship between the failure index and the strength ratio. The failure index cannot provide valuable insight on failure unless it has a value of 1. In fact, depending on the stress values, it is even possible to obtain a negative failure index.

As a rule of thumb, whenever a failure criterion involves mixed order terms (e.g. Tsai-Wu), there will not be relationship between the failure index and the strength ratio. In these situations, failure predictions should be based on the strength ratio.